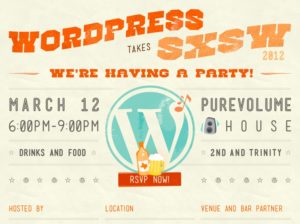 I’m proud to have played a small part in securing a venue for the WordPress party at SXSW 2012. Jane Wells tells the story on the WordPress blog:

Once upon a time, David Wang had a business called Buzzmedia in Malaysia, with the twitter username @buzzmedia. When David changed gears and started ClickWP, a WordPress support business, he stopped going by the Buzzmedia name. In the U.S., a company also called Buzzmedia wished it had that Twitter username, and asked if they could have it since David wasn’t going to use it anymore.

David, feeling the WordPress community love, said he would give them the name, and suggested they do something in return for the WordPress Foundation. So, everyone talked to everyone else and it worked out that Buzzmedia was willing to donate a fantastic venue for this year’s party as well as covering the bar.

In the end, the Foundation got a great SXSW party, Buzzmedia got their twitter username, and David got the warm glow of having used his power for the good of the WordPress community, and they all lived happily ever after.

I’m glad that everyone lived happily ever after, though I do wish I could attend the party and SXSW in person. If you’re traveling to SXSW and hanging out at this awesome party, could you send me a tshirt? Have fun guys!

David has over 15 years of experience with web geekery and WordPress. That experience spans every­thing from cre­at­ing affordable websites for small businesses, developing custom themes to opti­miz­ing WordPress sites for thou­sands of page views in a day. Say hi to David on Twitter at @blogjunkie.

Established 2011 in Malaysia. Serving 428 happy customers around the world.

Get to know us or get in touch.